Two 3 Peaks Fell Races in a row for Rob 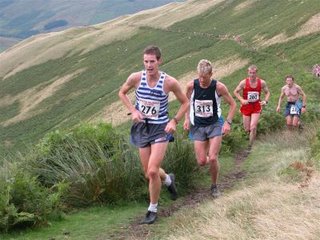 Jebb, who runs for Bingley Harriers, won the fell race and cyclo-cross race in 2005 (and was only the second person to do this after Andy Peace) won the fell race in near perfect conditions by a big margin on six minutes. Despite the seemingly comfortable margin, Rob’s win was largely consolidated through a strong final descent of Ingleborough (to Horton). The course is not a very hilly one for pure fell runners, and Rob was challenged closely until well past the half-way mark by distance specialists.

If Rob goes on to win the Three Peaks cyclo cross in ’06, then he’ll be the first person to achieve two of those illusive ‘doubles’.

Get Great Deals on Cycle Clothing & Gear At Probikekit.Com