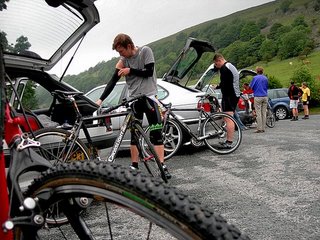 A healthy turn out last Sunday (20th) for John Rawnsley’s training day based at Buckden in the Yorkshire Dales. If you’re as obsessed as I am about the three peaks – and it seems plenty of people are – it’s an idyllic way of spending your Sunday. Not only did the day involve riding off road for nearly twice as long as you would in a normal three peaks race, but the whole day is peppered with people talking ‘peaks strategy, equipment, and general tales of their epic races every September.

The day also flagged up one or two personal concerns about the ‘f’ word (fitness), but I’ve got a few short weeks to try and turn that round.