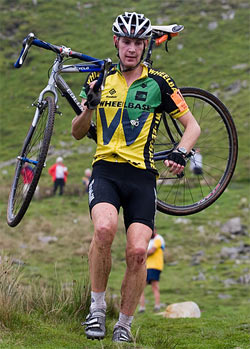 In a very special interview for what seems like an army of dedicated readers (if the site tracking stats are accurate) I’ve got a treat for you. Wheelbase rider Rob Jebb’s name is now synonymous with Three Peaks folklore (both running and cycling events), and it’s our pleasure to present this exclusive interview with Rob. (photo by Simon Barnes)

Six wins. Which was the best one?

None really stands out as being better than any of the others. I suppose if I had to pick one then the first win was special because of Tim Gould being there. When Nick (Craig) was riding in 2002 I was worried because I knew he was going to be good, so that win was special too. This year’s was obviously very special too. Someone told me I had 12 minutes at Penyghent but I still couldn’t fully relax.

When were you under the most pressure?

I felt the pressure in 2002 when I was defending champion. Nick Craig had an amazing record and although it never materialised as a close challenge that year, he was with me until Whernside in 2003 and I think that was probably the nearest I’ve been in my six wins to serious pressure!

You’re not as tired and don’t feel the pain so it’s not as bad. There’s a bit of you that thinks ‘what could go wrong now’, but it’s natural. It’s certainly easier leading than chasing!

You’ve proven a strong winner in different weather conditions. What conditions do you hope for on race day?

I look forward to misty and miserable conditions really – it just psyches some other people out and doesn’t bother me. Having said that, I don’t mind any conditions and have gone well on the sunny dry years. It’s all about being fit for the race.

What about the preparation then? How much specific training do you do for the ‘peaks?

Some years I’ve done quite a bit on the bike but it’s got less recently because the fell running’s been so busy [Rob won both the British and English championships this year – Ed]. This year, I only got my ‘cross bike together the week before, and so there was virtually no off road riding. I probably ride my bike twice a week at the most.

When people describe your wins they often qualify it by saying you’re a fell runner. I’ve watched you ride away from the whole field two years in a row before you even shoulder the bike.

Yeah – it’s a bit annoying but you get labelled. My running definitely gives me the fitness to win the race but people forget I’m not bad on a bike – I’ve been seventh twice in the national ‘cross championships and have the fastest ride in the [ludicrously hilly] Fred Whitton challenge. I won the divisional road race championships the only year I rode it too.

Finally, what’s the secret? What tips will you share with the readers [and me!]?

Don’t be obsessed with your bike weight – it’s got to be tough enough for the job. Use fat tyres – don’t worry about fast skinny ones – a puncture will lose you more time than skinny tyres will gain. The other one is to just train as hard as you can. It’s so easy to say but it’s the most obvious thing.