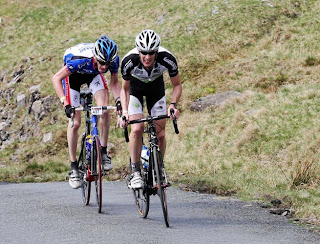 Six time three peaks cyclocross winner Rob Jebb (Wheelbase) showed this weekend that his strength is still with him in the Fred Whitton Challenge.

Jebb’s taking of the record for the 109 mile Lakes loop from team mates (and three peaks regulars) Lewis Craven and Stuart Reid showed his usual guts and crank-bending strength. Jebb took the joint honours with national hill-climb champion James Dobbin, the pair of them riding the last 66 miles over the day’s steepest climbs on their own.

Also looking ominous is a dark horse challenging for this year’s veterans prize in the three peaks cyclocross. Barrie Clarke (Lakes RC) finished fourth out of the 800 sportive riders, not very far down, and showing that age hasn’t dulled his appetite for hard riding. Clarke entered last year’s doomed three peaks for the first time in many many years, and told me in September 07 that he’s ‘just aiming to do a respectable ride’ in the Peaks – but I think I know the former national cyclocross champion’s competitive side better than he does! Clarke noteable also rode the Fred Whitton ride on his Giant Cyclocross machine…!