From Hayfield in Derbyshire, Here Come the Belgians rider Richard Seipp is an experiences 3 peaks and general cycling / mountain / running / outdoor man and has contributed to this blog before.  Richard has sent me this very special training blog from his … ahem … “Family Holiday” in the Lake District.  Great reading, and starting to give me slight not-enough-hours-in-the-saddle nerves…. great stuff. 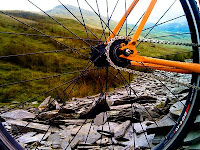 I wrote this a couple of days ago before I read Dave’s train your weaknesses comments.

I’ve done the Peaks before, and I know that I can ride a bike well enough to ride all the descents and pass people, and I hold my own against my peer group on the road. I’m a better rider than I am at getting up those steep ascents on foot for sure.

This year my “training” has included bike riding of course, but the emphasis for the first time is to make sure that you folks don’t leave me behind at twice my pace on those bits of the race where we don’t ride bikes.

I drove up to the Lakes this week for a holiday with the family, only a few days, snatched between work commitments. I arrive in the Duddon Valley with my CX bike late afternoon. I say Hi to our friends and then head into the hills.

I ride, 400 yards from our accommodation, and then lift my bike towards my shoulder. Walna Scar Road. Once upon a time this may have been a road, but now the rumble tumble of boulders may be still as wide as a road, but from the Seathwaite side, it gives an enforced opportunity for practising the carry. A few hundred metres height over a good kilometre of rough.
I hang a right onto another bridleway. A Lakeland right of way marked on a map tells little of real life. At first I ride fast then the bridleway quickly becomes impassable on any kind of bike. Steep rocks, then wheel swallowing bog. Plenty of opportunity to practice jumping on and off the bike as the ground fluctuated between the ridable and not. I pass three walkers walking up towards. One says without prompt “Good luck with the 3 Peaks”. The drop back to Seathwaite is exhilarating, super technical in places, and of course fast.
Only a short loop, but more off than on the bike.

Next morning my wife asks me to go for a run, and I oblige. She jokingly says “I’ll run, but you run with your bike.” When I’ve done the peaks before I’ve had to carry my bike, but I’ve never practised doing it. In fact I hated the carrying bits. No practised technique, only an awkwardness that reflected my refusal to see this as an important part of the whole. I didn’t carry the entire 6 miles but I either ran alongside my steed or carried it, soon working out which method would best suit on race day. A tough little session, and of course my wife was quicker than me, but only just.

Next day I had a free, no obligations, so a big bike ride?

And if so, what is your weakness? It’s not riding a bike is it?

The previous afternoon we’d been for a walk with the kids up the Old Man of Coniston, we’d surveyed the clear panorama to the North. In the distance we see ScaFell Pike.

Our last day here. A lie in and then a pleasant lazy morning spent with friends and the family. I have a plan for the day. One that will not involve my bike. I suggest an itinerary for the day to my friends, but they all smile, and say they have other plans.

12pm, I am good to go. My computer mapping program gives a forecast time of 6 hours for running based on my fell running times. It would take more, I knew that. I won’t give my actual route, as the value of which, via coniferous forest bashing,thigh deep bog stomping, knee deep tussocks and brambles is not worth repeating, but my calves were burning from the start, and that is a good thing.

Once into upper Eskdale I can see 600 metres above me the highest spot in England. Some folks are further up the hill,and Imagine them as competitors in a certain race. I start running hard. Steep rocky ground, changes to loose scree. My breathing is breathless. One by one, I reel them all in.

Once at Broad Stand it starts raining, I keep on running. Dare I say it the terrain a bit harder than the Yorkshire Dales has to offer, but it’s always nice to have something in the head at a date in September to remind yourself that things have been worse. At the top of ScaFell Pike I spend a moment, in which a Euro Fighter magically does a roll, a couple of hundred feet over my head.

I don’t roll off the Pike but I’m still fighting and pushing the speed. Down the hill, and back up the next rise. By Great End the farthest out point of the day the weather has turned rude. I keep running on to Esk Pike. Then I engage brain, and change my planned route slightly to avoid the distinct possibility of getting lost in the Lakeland mist and rain. Down Ore Gap and another non existent “footpath” takes me to the valley. Still running, though more than once the bog stops me dead. No one to race against now.

Once at the road I’m on the days Horton Helwith stretch of my route, only 4 miles left, though with no bike. I’ve never suffered on the last road section of the Three Peaks Cyclo-Cross. I did in the Lakes that day.

8 hours to the minute, 21 miles of running 5000 feet of ascent and descent and not a revolution peddled.

Looking forward with a wry smile to Simon Fell now.