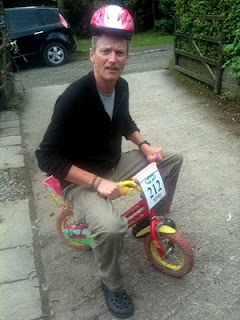 2011 is going to be even more special than usual for me – and for my brother Phil. Both lovers of the 3 peaks come what may, some strange string of events has led to two of our cousins riding this year’s race. Not hugely strange to most people, but basically eldest cousin Mark Holmes (right) has made a bit of an effort to get to Helwith Bridge from his home in Nelson, New Zealand.

His travelling round the world on a mid-life career break with wife Sarah has brought him back to his home country of England in September. Fitting in with Dave, Phil and friends in September – as you’ll imagine – means one thing really. “You’re welcome to come and stay, but you’ll have to enter the 3 peaks cyclocross“. That type of thing.

Luckily, Mark’s a very active mountain biker down under and is up to the challenge, but has never ridden a ‘cross bike until last week(!!). His digging deep experience as a former fell runner (not a shabby one either, completing the Ben Nevis race in ’93 with me, as I recall)

To compound matters, and celebrate the family spirit – Mark’s brother Adrian (still living in Blighty) thought he’d better join in as well. Occasional off-roader and cyclocross bike commuter, Adrian too has never done a cyclocross race – but will draw upon extensive mountain experience to put together a first good effort ‘inside the time limit’ as he modestly puts it.

Great times for my family, come what may.