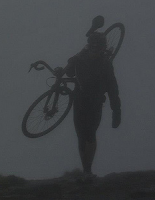 Twinkly Dave Powell is one of the mileage – daft- long rides guys who still considers the mere 4ish hours of the 3 Peaks worth getting out of bed for.  Even his sick bed in this case.  Dave came down with a belter of a snivvle just before the 3 peaks.  Obviously it was much less worse than any I’ve ever had.

If you only read one blog post on the 2012 three peaks, make it this one.  Proper Bronte stuff.

As I found myself, still astride the bike, pinned against a drystone wall by howling wind, my face a contorted mess as I grimaced and tried to drive onwards, I knew this time round was what I’d hoped for.
My performance would be, by a long way, down on what I could do, but there was no way I was going to miss this fight.

Get well in time for the weekend, Dave.