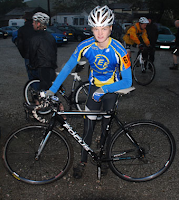 Sam Roper’s first 3 Peaks wasn’t ideal… apart from the biblical weather, he hit a pot hole on the road just before Whernside which was hidden beneath one of many puddles, but managed to finish despite being very bruised, grazed and slightly concussed.

Having a film crew in your kitchen filming you eating porridge at 6:40 in the morning is not exactly a stress free way to start your first attempt at theThreePeaks, but it was what I agreed to when ITV approached me about participating in the making of feature on the Three Peaks Cyclocross. I was the youngest person in the race and they thought it would be interesting to follow my training and race.