They’ve come from far and wide…

The combination of a uniquely challenging cycle-cross course coupled with good old Yorkshire hospitality draws in competitors from an ever increasing list of countries. The stories that we hear back from our international riders are varied, and a pledge to return to the race in future years seems to be a common theme. Per-Ake Elisson of Fredrikshofs Cycling Club in Sweden shared his experience of comradery Pen-Y-Ghent, imitating Jens Voigt, and that well-earned pint at the end of his first race completion. Needless to say, he’s back again this year…! 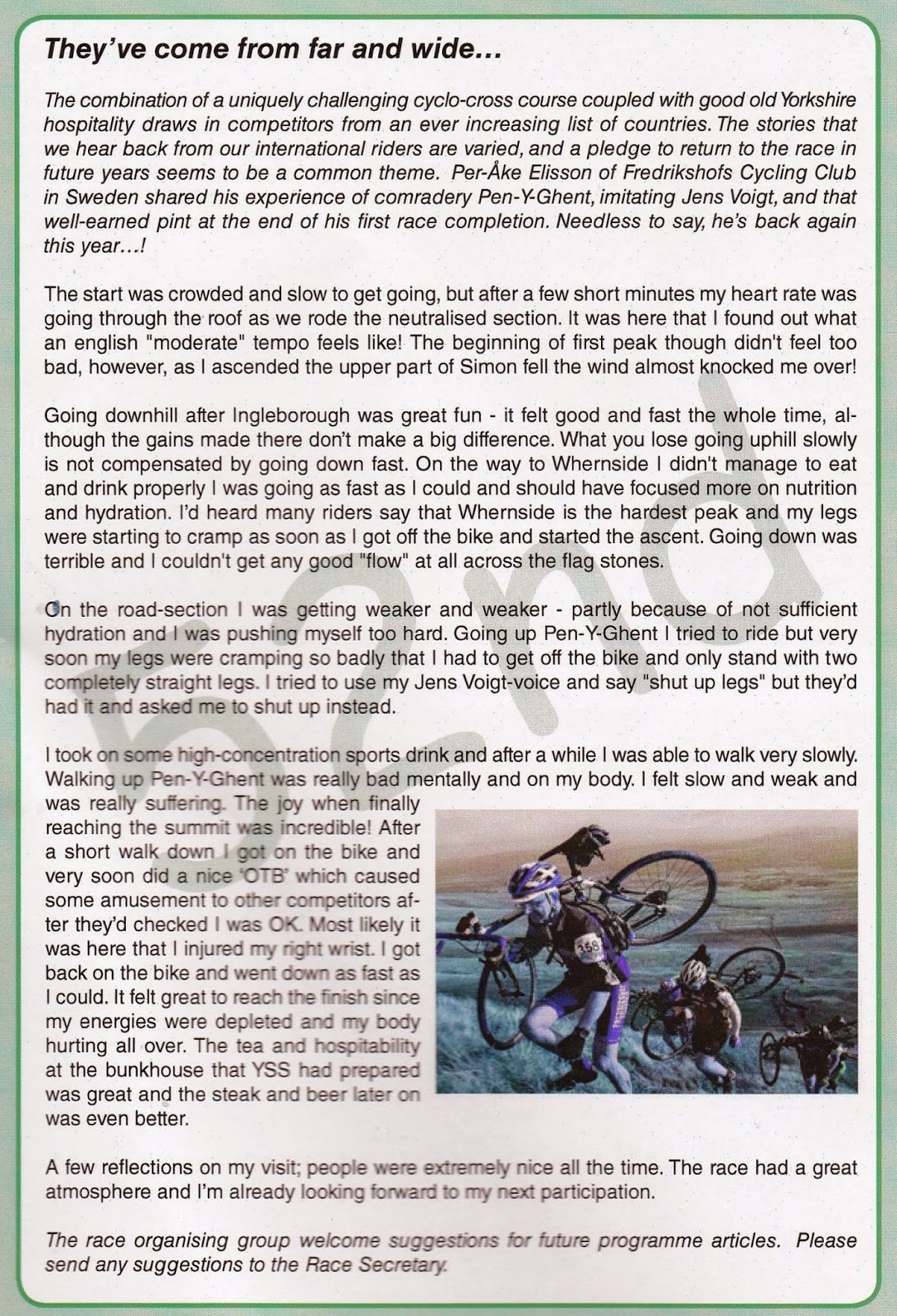 The start was crowded and slow to get going, but after a few short minutes my heart rate was going through the roof as we rode the neutralised section. It was here that I found out what an english “moderate” tempo feels like! The beginning of first peak though didn’t feel too bad, however, as I ascended the upper part of Simon fell the wind almost knocked me over!

Going downhill after Ingleborough was great fun – it felt good and fast the whole time, al-though the gains made there don’t make a big difference. What you lose going uphill slowly is not compensated by going down fast. On the way to Whernside I didn’t manage to eat and drink properly I was going as fast as I could and should have focused more on nutrition and hydration. I’d heard many riders say that Whernside is the hardest peak and my legs were starting to cramp as soon as I got off the bike and started the ascent. Going down was terrible and I couldn’t get any good “flow” at all across the flag stones.

On the road-section I was getting weaker and weaker – partly because of not sufficient hydration and I was pushing myself too hard. Going up Pen-Y-Ghent I tried to ride but very soon my legs were cramping so badly that I had to get off the bike and only stand with two completely straight legs. I tried to use my Jens Voigt-voice and say “shut up legs” but they’d had it and asked me to shut up instead.

I took on some high-concentration sports drink and after a while I was able to walk very slowly. Walking up Pen-Y-Ghent was really bad mentally and on my body. I felt slow and weak and was really suffering. The joy when finally reaching the summit was incredible! After a short walk down I got on the bike and very soon did a nice ‘OTB’ which caused some amusement to other competitors after they’d checked I was OK. Most likely it was here that I injured my right wrist. I got t back on the bike and went down as fast as I could. It felt great to reach the finish since my energies were depleted and hurting all over. The tea and hospitality at the bunkhouse that YSS had prepared was great and the steak and beer later on was even better.

A few reflections on my visit; people were extremely nice all the time. The rave had a great atmosphere and I’m already looking forward to my next participation.