A bit of development this year on the ten speed front that will affect gear choice in this year’s 3 Peaks… the recent announcement that Shimano has released 10-speed cassettes for their SLX and XT (Mountain Bike) range means that (with the purchase of a XT or similar MTB rear mech) 10 speed cassettes with double chainsets are an option for any riders this year.

Last year’s win by Nick Craig brought many a comment about his excellent choice of selecting SRAM’s XX cassette and chainset – giving him the ultimate ‘non-dismount’ options on Penyghent without the comprimise of having his previous set-up of a front triple chainset. 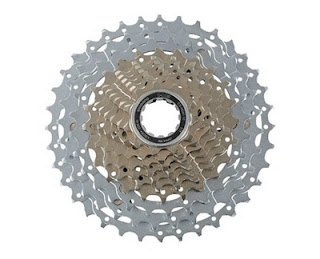 Shimano’s more affordable ten speed gear has previously been limited to a rather knee-buckling low gear of 27 on the rear… but a 36 bail-out now makes 10 speed a mainstream option for those of us wanting to ride that bit further up Whernside and Penyghent in particular.

More here on BikeRader on the tech side.

Me? Well – I’m just relieved that I don’t have to sell my house, wife and children to get the SRAM XX for this year’s race.