The trip from Switzerland, and a discussion

I’ve been lucky enough to ‘meet’ a few people on the internet with this blog, one of whom is James Eddison.  James lives in Switzerland now but makes the journey over each year.  It’ll come as no surprise that James is a fellow obsessive… here’s a discussion about some of the finer points of this year’s race (with my, slightly less verbose responses in bold and prefixed by DH).

The trip was worthwhile as always, though the race and results not as I had hoped for! I will try to explain why, and perhaps ask for some advice for next year?
This year my training has been limited on the bike, but I went into the weekend very fired up and actually feeling quite strong. I think this was a result of having quite a diverse range of exercise over the full year. After the peaks last year, I went on and did my first ever half Marathon over here without actually doing any running training (ouch!), then when the snow came we were straight into the cross country skiing (freestyle/skating style). We have started doing a famous cross country ski marathon in Engadin/St Moritz every year. I originally entered as a method of learning how to XC ski, but now it’s become a sort of tradition with us at the end of the winter season. It’s a great way of keeping fit when there’s too much snow around to ride.

The plus side is that come the start of the cycling season, you have a great base fitness to work from. That, with a bit of mountain biking some road races/riding and a bit of fell running all helped. Though through the year I probably only did about 1500km of riding, compared to about 5000km the previous year. So, I was surprised to get to the Peaks this year feeling as strong as I did.

DH – Me too – less and less each year (family, business, generally other things to think of!)  Done 1170 miles on bike since 1st Jan – just checked my Garmin logs

My time up Ingleborough was 2 mins quicker than I have ever done. I remember you saying people’s times were down on average for this leg due to the headwind, so I was chuffed to have got up there quicker.

My run down the other side was smooth enough, apart from a whole group of us dropping off the edge too early and having to traverse across to the path. It was probably a bit slower down than last year due to the moisture however. The run up to the start of Whernside was ok – if a little slow for my liking in the pack I was in. I did my couple of turns on the front but was very conscious about pushing too hard before the climb.

Then the first mental blow hit me. As soon as the track started climbing, cramp set in on both legs just above the knee cap towards the inner side. Then it moved to the quads etc… It pretty much stayed with me up all the steep parts where about 10 people passed me. On the lesser slopes it died away and I could pick other folk back off again, but I was yo-yoing. 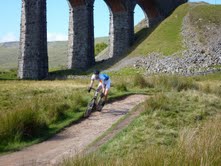 Down Whernside I passed quite a few and was pretty happy with the descent – I stayed on the paved track all the way, only getting off for the steep couple of drops high up. I passed quite a few folk on the way down there. Then at Ribblehead, I managed to tag onto one chap, which then became a pack of about 8 of us. I sat in all the way to save energy for PyG. I was hoping to ride far more this year owing to the 34-34 set up I mentioned thanks to 10spd Shimano, and I did ride more than usual, but at a total snails pace. The cramp had sapped everything from the legs, even though aerobically I was feeling fine.

DH – the headwind up the laned track was deceptive this year – we all suffered!

Then before the track kicks to the right for the final traverse, or after the gate actually, the cramp set in again to the point I was close to tears. Quads, hamstrings, calves – the lot! You can’t stretch your quads because your hamstrings cramp and vice versa. Somehow through grit and determination I got to the top! The descent was good. I have spent a lot of time on stupid trails out here with the cross bike improving the down hilling to the point where I can match/beat most folk within my time window. I flew down passing a good few people and got onto the road at Horton at about the 3.54 point. Another chap I was with shouted to me that we could still do sub four hours, which would have been some consolation at least! As we set off, I had that horrible lump lump feeling from the rear – a chuffing flat. ARGH! I pride myself on bike preparation, and cannot stand it when kit lets me down. Additionally, 60psi, landcruisers and a body weight of 60kgs should be enough to withstand a lot of pounding. Not that day. Knowing it was only a Km or so down the road to Helwith, I tried to ride it out knowing that time spent changing a tube (my support crew had already gone to Helwith as they thought I was on the home straight) would be greater than the time lost riding a flat – but the tyre and rim parted company. So, stop, change tube, inflate with gas cylinder – gas cylinder unseats tyre off rim mid inflation. ARGH! So, no option but fit and try ride to the finish with lumpy back tyre. 500m then BANG! Second flat in 1km. ARGH! – I’m surprised you didn’t hear my expletives from the finish area. Approx 25 riders passed me whilst all this was going on, then slow ride back to Helwith. Trying to negotiate the right hander junction just before the bridge was interesting with tyre rolling away under me!

DH – Gutted. I’ve come off PYG with snapped forks in the past so know the blues involved.

So, not the best of races when initially I was feeling good.
Cramp: Haven’t a clue why this happened to me. Last year I did get a bit of cramp up Whernside and up PyG, but not as bad as this. This year I did more specific fell running, hiking with all the backpack kit, and finding the steepest route up our 500m climb here with cross bike on back. Maybe I didn’t stretch enough in the weeks prior to the even to supple up a bit. Maybe I should also have had more magnesium/potassium/ general salts prior to the event. Any advice would be very gratefully received on this one.

DH – I have reduced cramp significantly over the years and I think it’s due to my dining out on pure simple energy products all day.  SiS Gels, SiS ‘Go’ and SiS PSP22 – basically, they all have those essentials in and they’re as near as I’ve got to eradicating the problem, but a cold day has an odd effect on sweaty, damp cycling shorts.

Wheels and Tyres: As I only weight 60kgs and my bike weighs 10kgs, it’s a great percentage of my body weight. If you don’t mind me asking you, what wheel/tyre combo do you run please? I hope to build for next year some Stans No Tubes road rims, with cross tyres and some lighter hubs. Doing this I calculate I can save 1.4kgs of weight by reducing hub weight, getting shut of tubes which should eliminate pinch punctures, and getting rid of the ridiculously heavy landcruisers. I suspect you are running tubs of some form – which would help me a lot. I just have more experience of a ‘no tubes’ set up on my mtb.

DH Last couple of years I’ve run 34mm tubulars on standard tub rims.  I put notubes in them just in case.  Tubulars with Stans in them way better than tubeless because of the simple physics – look at a profile of them – they’re round.  A 65psi tubular (or prob 60 in your case) has way more bounce in it than a clincher (even tubeless)…. and little of the pinch puncture risk.  Down side is you’re screwed a bit if they puncture… but that’s the case with clinchers sometimes as you’ve proven.  You also didn’t factor in that you f*cked up in mending the first not getting it seated on the rim properly. Harsh, I know, but that’s down to sheer panic / rush – I’ve been there too.  Level head is crucial at times like that.

Next year I don’t have any big races planned. 2009 was Trans Alp road race, 2010 was Trans Germany Mtb race etc.. so I am thinking of going balls out for the Peaks as the main aim. I really want to do a sub 3 hr 45 time if possible. Over the last couple of years I feel to have, pardone the pun, ‘peaked’ too early, then the run up to the peaks has been mentally tough extending the season from late May through to the September. Motivation has taken a dive about August time and only recovered about two weeks before the Peaks.

DH – My training proper started after family hols c. 20th August.  It’s do-able if you focus on quality and don’t panic about quantity – you’re not after the win!.

I had a look for you at the finish, but I think you had already changed into civvies and I couldn’t spot you. Shame. I would like to have a sit and chat with you sometime, and muse over the race etc, my pals here just don’t quite ‘get it’.

Maybe one of the times I come back home we could meet up for a ride somewhere? I left the cross bike back at home in the Skipton area this time as time was short to pack it up for the flight back. So, that’s about for use when I go home next. I get home a bit more frequently now as I have bought a house close to Skipton which I am renovating for any eventual move back to Yorkshire (which isn’t planned yet – we love living here too much at the moment!), so there could be a few opportunities.

DH – would be great but to be realistic I can’t even seem to plan in a ride with my brother who lives an hour away – life’s mad – but do let me know when you’re over – you never know!

So, another essay. Hope you’re still awake!
Congrats on your result by the way, especially considering the brake ‘issue’. You should be very happy with that in the circumstances.

DH – Chatting about it to someone the other day and decided the best analogy was to ask someone to drive around in their car and just use the gears to brake. It’s do-able but needs a lot of “planning”.