The Isle of Man TT of cyclocross

“the thought struck me during a moment of clarity half-way up Whernside that this race is essentially what the Isle of Man TT is to Moto GP racing… the latter is a modern-day slightly sanitised spectacle, whereas the former is the purest form, as tough and still to this day demanding of the ultimate sacrifice as it always has been… and I found myself thinking the same of the 3 Peaks Cyclo Cross in comparison to an hour and 5 laps around a city park” 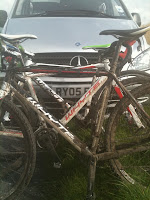 Some cracking thoughts here post-race by Whyte Bikes designer Ian Alexander.  I knew Ian for many years – first when he raced as a skinny junior (Will his thighs fill his cycling shorts now? Katie asked me when I told her Ian would finally be riding – we haven’t seen him for ten years!).

Aside from catching up with a friend from my days in Cheltenham, I was so pleased to watch my favourite race unfurl itself to such an experienced cyclist as Ian.  A modest but strong and very wise rider, Ian’s ridden the Ras in the past (as a team mate of Rob Jebb at the time, as it happens) and certainly knows a thing or two about bikes.

It was a great joy to link up again with Ian and a shame I wasn’t in good enough condition to chew the fat after the race, wandering round all slinged up as I was.  His blog’s a great read here on the Whyte website. Thorough, analytical, but also heartfelt and warm.

“I fed and watered without problems too and I was pretty sure the only wall I was likely to hit was the hard stony sort lining the trails. ”