Frischi: “A matter of honour” 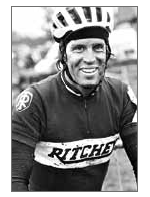 John Rawnsley’s kindly sent me this PDF of an article that the hero we call  Thomas Frischnecht wrote for Road Bike Magazine in Germany.  With photos fromt he fabulous Cheryl King, it makes a great scene for the epic 2012 race.  I don’t think he’ll be back again, sadly.  Ticked off, done that. Who can blame him after 2012 !

Apologies for the fairly poor translation – I’ve done what I can!

Two quotes stick out, to me as summarising this race in different ways:

“In all my years as a professional mountain biker and cross rider I rode many races, but the 3 Peak Cyclocross was the hardest of all.”

“Some have ambitions, which is easily recognized by its carbon frame, disc brakes and functional shirts. Others look more like the gnarled farmer next door who rides cyclocross once a year with museum material at the start.

It was the wild 70s and I was a little boy when I first heard those legendary tales, of a cross race on the British Isles. Over three barren mountains that rise from the meadows of Yorkshire, on the mud, over die-hard types that it poured out mercilessly for a distance of 60 kilometres and 1600 metres. My father was a cross-mobile professional. And even though I was still far away, to be a self, the stories grabbed me by the supposedly toughest cross-country race in the world and allowed me to never let go.

To this day. During my time as a professional I have often thought of the “3 Peaks”, but somehow it never worked out to get to the start. But the 50th Staging of the spectacle I can simply not miss! To pay tribute to the historic event, I grab my Swiss-cross racer steel and make my journey into the past. Here authentically to compete is a matter of honor. But with the honor it is one thing when the apocalypse is imminent. The bearded organizer John Rawsley who emerged in 1961 as the first winner of the 3 Peaks, welcomed me and my team with the words: “It was the last 50 years has never been so muddy and wet. And tomorrow is a bad blizzard on us. With a lot of wind and rain. This is hard!

Mud, wind and rain? I cringe inwardly shrug. Such conditions include the cross as sun finally to surf, and besides I have in 24 years of racing has gone through everything. I think at least. That is not the case, I’ll have to find out later in the day painful. Actually, I should have made the compassionate tone puzzled, but still I think he just wanted to scare us – and look forward to the launch. Rightly so, as the scenario gets under your skin: 600 passionate Good crosser who, despite bad weather, gathered in Helwith Bridge – a collection of four houses and a pub, which is far away from any town in the middle of nowhere. All starters not occur – as usual – at the famous 60 minutes, but deny a cross-marathon that takes several difficult hours.

Three mountains, it is on the race course to conquer, according to organizers consisting of 28 km of road, 33 km trail and 6 to 8 kilometers remaining, which are advertised as “unrideable”. Whatever that means. Of the surrounding peaks, we have travelled to, nothing can be discerned, the clouds hanging low. All shades of gray, and heavy rain almost horizontal. Participants, however, are mixed. Some have ambitions, which is easily recognized by its carbon frame, disc brakes and functional shirts. Others look more like the gnarled farmer next door who rides cyclocross once a year with museum material at the start. We go dashing. The first 5 miles we roll despite neutralization at 40 km/h over the asphalt. The peloton is hot, it comes to the first fall, even before the race has even begun. Then it goes to a sheep pasture, get off the bike and high towards Ingleborough – on the first peak of the day. Much here that would be run, it was clear. But we equally have to cover the complete 500 meters on foot, but a little unexpected.

But that’s only the beginning of a long hard journey full of surprises. As mountain runners the top drivers pull away and disappear in the mist. When the terrain gets steep, first doubts shoot through my head. So blatant I had not imagined this adventure in England. Not even half of the first ascent is done. And it gets even harder: It is so steep that I have to drag myself with one hand on the tufts of grass. Hard work!  The mountain is steep again, the wind was all the more intense. Peaks of up to 90 km / h make the shouldering of the bike impossible – riding cannot even be considered. The stone walls, like a grid over the landscape, are the only protection from the wind, as greedy morale-robbers pounce on me. I need to pull together to dispel the negative thoughts that creep up slowly. For this, I’m not prepared.

I would not have so many supporters around me who make these conditions even no joy, but apparently far less harm than me, my journey would be in the cross-past perhaps to end here. So I turn to survival mode. A function that is apparently normal for the British state. Finally we reach the summit, but my hope is that I can finally run fulfilled, unfortunately. Again and again we must dismount and jump over mud holes, of which you never know how deep they are. This ‘cross is the most demanding variety, and I’m really glad when we again have asphalt under the tires!

After the first hill is finally defeated, 10 kilometres breakneck speed on is on the agenda. I use the transfer to the next peak to organize my thoughts and myself mentally adjust to the next grind. With success, as shows on Whernside, because the climb I can not remember it being nearly as difficult. The subsequent kilometres of downhill over stone slabs shakes his still-functioning part of my brain through strong, but slowly I have the track – and not track me – under control.

Another 20 kilometers of asphalt, and then up at the Pen-Y-Ghent, the “Bring me home mountain”. Now it works! The incline is almost a formality, with the magnetic attraction of the destination not to be underestimated. After 3 hours and 51 minutes to reach Helwith Bridge and in 30th position. A result, for which I had to overcome my inner demon 3 times.

As simple as the event is held, so difficult are their conditions. In all my years as a professional mountain biker and cross rider I rode many races, but the 3 Peak Cyclocross was the hardest of all. At the same time, it’s also the race from which I’ll be taking most of impressions – and of course some wild stories: Of three mountains that rise from the meadows of Yorkshire, from deep mud and die-hard types, which it is 60 kilometers 1600 meters and rain that poured out mercilessly.