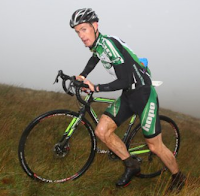 Rob Jebb secured a record-breaking ninth victory in the 50th Three Peaks in North Yorkshire on Sunday, crossing the line more than ten minutes ahead of his nearest rival.

The Hope Factory Racing rider covered the 40km course, which takes in the peaks of Ingleborough, Pen-y-Ghent and Whernside, in 3:09:21. More than ten minutes back was his team-mate Paul Oldham, while 2011 champion Nick Craig (Scott UK) had to settle for third spot.